The Gender Wage Gap in the UK: Exploring the Latest Data

Through all stages of the pandemic so far, we’ve seen the impact of COVID-19 on the UK workforce, and particularly on women. While economic gender inequality has always been apparent, the last two years have exacerbated the problem and brought about a heightened need for action. One need only look at some of the data—mothers are 1.5x more likely than fathers to have become unemployed since the start of the first lockdown, and are also more likely to have been furloughed. Further, women dominate part-time work, while men are far more likely to be full-time employed in the long term.

But how do we process this data? What causes this gap to widen so quickly and narrow so incrementally? Most importantly, what are the economic consequences of not addressing these causes or, rather, not addressing them decisively enough? In this first instalment of a Patrick Morgan series on gender economics and the UK workplace, we explore the latest numbers and cover some potential solutions as we prepare to dive more deeply into the intricacies of gender dynamics.

The situation in the UK

Although the gender wage gap is beginning to close, there are still huge disparities between men and women’s pay within the UK. Statistics show that, in the UK, women still dominate part-time employment, have the largest share in unpaid labour, and are scarce in the top percentiles of the UK income distribution. The Women and Equalities Select Committee also reported that there has been an unequal economic impact of the COVID-19 pandemic on women. However, the true impact of the pandemic is not yet known due to a pause in wage gap reporting, and some statistics being based on estimations. 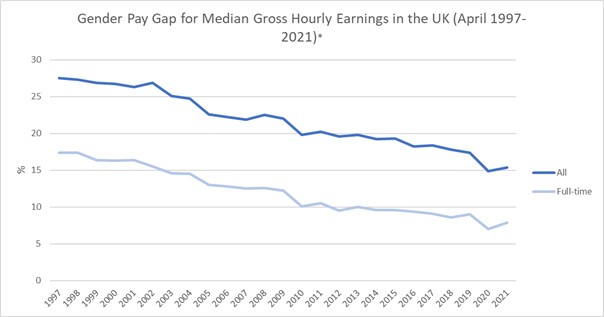 In 2021, the gender pay gap among full-time employees in the UK was 7.9%, up from 7% in 2020. However, this still shows a decrease from the pre-pandemic percentage of 9%, suggesting that the downward trend is continuing, but that COVID-19 may have stunted progress. Among all employees, the gender pay gap increased to 15.4% in 2021, however this is again still a decrease from 2019, when the gap was 17.4%.

What is causing the gender pay gap?

In the UK, women are much less likely to be in full-time employment in comparison to men, which impacts earnings and widens the pay gap further:

Due to increasing part-time employment, women are scarce in the top percentiles of the income distribution. A report by the London School of Economics found that over the past 17 years, 0.2 per cent of UK-born white women were in the top one percent of earners, and less than 0.1 percent of Black women born in Britain.

Why do women dominate part-time employment?

One of the main factors behind women’s income—and labour choices—is their disproportionate role in both household labour and caregiving. Society places a stereotypical caregiving role primarily on women, meaning that women undertake a predominant gender share of unpaid labour.

Women take on a significantly larger (62%) share of unpaid labour in comparison to men in the UK, resultantly pushing women into making career decisions based on maintaining and ensuring a ‘work-life balance’. 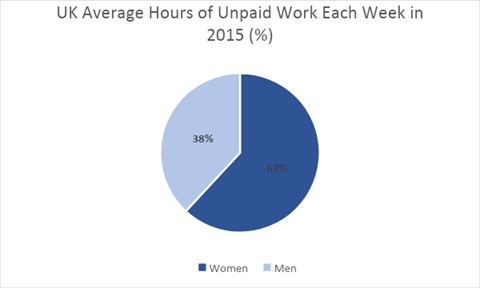 Theories of “statistical discrimination” suggest that this unequal distribution of household labour results in a “glass ceiling phenomenon”, where employers discriminate against women in terms of promotions, career advancement, and the gender structure of pay. It is more difficult for employers to provide incentives to those workers with high household labour hours, as they have less time to devote to their jobs. Thus, as firms perceive household working hours to be higher for women, they offer contracts with less progression and performance-related pay. This way, the “opportunity cost” for household labour decreases for women as they dedicate more time to unpaid household labour and caregiving, reinforcing pre-conceptions. This cycle can therefore explain the persistence of the gender wage gap.

A Eurostat survey of UK citizens found that over 35% of women in 2019 cited caregiving responsibilities as their main reason for part-time employment, compared just under 10% of men:

Main reason for part-time employment: Care of adults with disabilities, or children (UK) 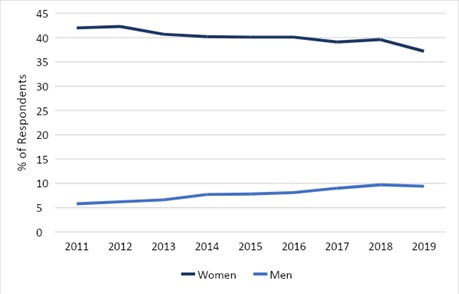 The increasing number of women in part-time employment, and the resultant child penalties women face, further explains the gender pay gap. The Institute for Fiscal Studies, for example, found that by the time a first child has reached 20 years old, mothers earn an average of “a third less per hour” than similarly educated fathers. This can largely be attributed to the poor levels of pay progression for part-time workers, as well as the trade-off between short term gains and long-term losses.

Occupational segregation is a further causal factor behind the gender wage gap, namely that men and women dominate different occupations, with predominantly female sectors having lower pay. There is a negative relationship between the average wages of an occupation and the percentage of women within these occupations. The UK economy tends to place a “wage premia” on specific occupations (such as finance and communications), where men are more predominantly found, and a lower value on occupations such as education and care, which women dominate. As the UK has an increasing number of women participating in the labour force, but featuring in lower-paid professions, a large gender wage gap can be observed.

Occupation by Wages and the Percentage of Women (2020)

The Office for National Statistics found that the largest fall in the gender pay gap since before the pandemic is among managers, directors, and senior officials, from 16.3% in 2019 to 10.2% in 2021. This implies that more women are now in higher-paid positions. This occupation group has one of the highest median salaries, equating to £22.01 per hour (excluding overtime) for full-time employees, compared with £15.59 amongst all full-time employee jobs. Thus, this could have a strong impact on closing the gender pay gap.

Gender discrimination within the labour market results in negative consequences for productivity, and losses in terms of efficiency. For example, discrimination in the labour force reduces the “available talent” within the economy and distorts talent allocation across different occupations and positions, resulting in stunted economic growth and reductions in “per capita GDP”. If women are disproportionately excluded from managerial positions, both human capital investment and equilibrium wages decrease for all workers, alongside the average talent of managers being reduced. The lowering of talent thus results in reduced innovation and technological advancements.

Furthermore, if women are entirely excluded from the labour force and only undertake unpaid labour, overall productivity would decrease alongside GDP per capita. As fertility rates also increase with inequality, decreasing the cost of children, the result is fewer women in the labour force, and less total output per capita.

There is still much debate surrounding how to close the gender pay gap, which could take decades to achieve. However, a few recent solutions have been suggested by think-tanks, businesses, and policymakers.

Currently, in the UK, employees can legally request Flexible Working Arrangements (FWAs) if they have worked for an employer continuously for six months. However, male uptake of FWAs has been low, which has been attributed to both the complex FWA request process and the persistence of the female stereotype as a caregiver. Therefore, it is proposed that FWAs should be more greatly advertised, male uptake encouraged, and that they should go a step further and enable more jobs to be undertaken on a part-time basis – without negative career impacts.

If both men and women have greater autonomy over their schedules, FWAs can increase the labour force participation of women and their representation in typically inflexible job sectors, alongside enabling men to have an increasing role in caregiving. FWAs replace part-time work as the primary flexible working option, therefore increasing the average working hours of women, and lessening the pay gap as women can benefit from greater career progression.

Include multiple women in shortlists for both recruitment and promotions

Many companies already include women in shortlists, or have a quota system in place. However, some shortlists only include one or two women and are predominantly male, which does not increase the chances of women being selected. Furthermore, there is sometimes not enough female talent at a senior level in a given sector to include women on shortlists. Therefore, hopefully, as women continue to progress to more senior roles, companies can be encouraged to diversify talent at the top level.

Statistically, women are less likely to negotiate their pay in comparison to men. Employers should clearly communicate the salary range for a role, to encourage women to negotiate. This aids applicants in knowing what they should expect, within reason, and could result in less gender inequality within salaries.

Increasing transparency surrounding the currently somewhat secretive processes, policies, and criteria for decision-making within a business can reduce pay inequalities. This means employees are more aware of what is involved regarding the scope and possibility of promotions, and that managers understand that their decisions need to be objective and evidence-based, because those decisions can be reviewed by others.

We’ve looked at numbers, and particularly recent ONS statistics exploring the gender wage gap, its causes, and potential solutions. What we continue to learn from old and new data alike is that this gap is more like a vicious cycle—stereotypes enforced by circumstance and self-fulfilment. Women get trapped under glass ceilings, in roles that offer limited progression, especially in direct comparison to predominantly male industries. Though it’s difficult to envision a future of absolute wage equality, transparency and active efforts towards stronger diversity, equity, and inclusion are crucial if we are to significantly reduce this discrepancy.